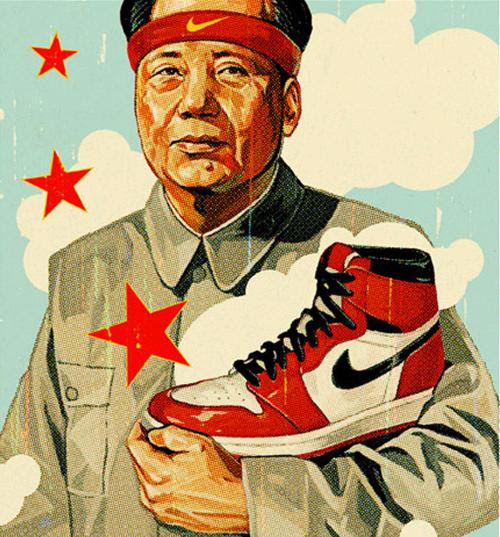 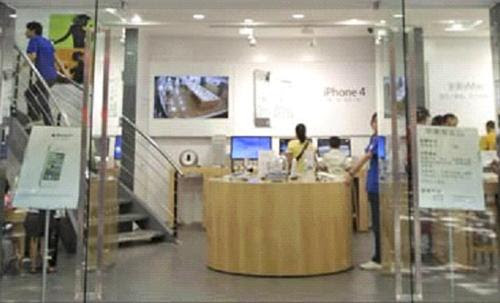 Customers and employees are seen in a fake Apple store in province.
Chinese counterfeiters have had a field day pumping out knockoffs of Apple Inc's best-selling iPhones and iPads, but one appears to have gone a step further -- a near flawless fake Apple Store that even employees believe is the real deal.
Complete with the white Apple logo, wooden tables and cheery staff claiming they work for the iPhone maker, the store looks every bit like Apple Stores found all over the world, according to a 27-year-old American blogger living in the city blogger, who stumbled upon the store and goes by the name 'BirdAbroad'. 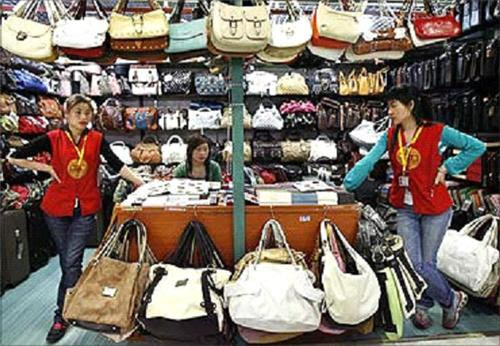 Shopkeepers selling fake designer bags wait for customers at a shopping mall in .
urged patience from the developed world as it seeks to stop infringements of patents, copyrights and other intellectual property.
State Councillor Chen Zhili told a forum on intellectual property was committed to strengthening intellectual property protections, but also urged wealthy countries to share more technology and show more understanding. 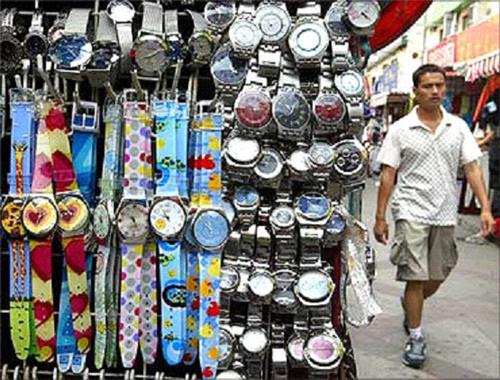 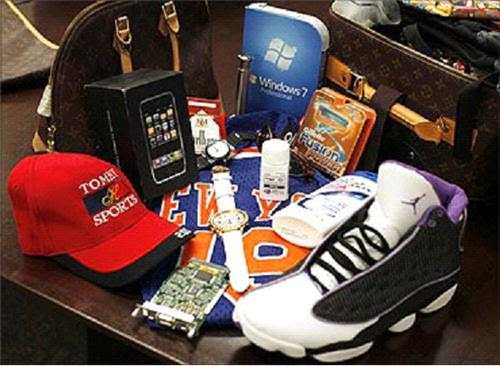 Counterfeit goods seized by the government are shown on display at the in northern .
The Organization for Economic Cooperation and Development estimates the amount of counterfeit goods and pirated copyrights in world trade grew from about $100 billion in 2001 to about $250 billion in 2007, the last year for which they have made an estimate. 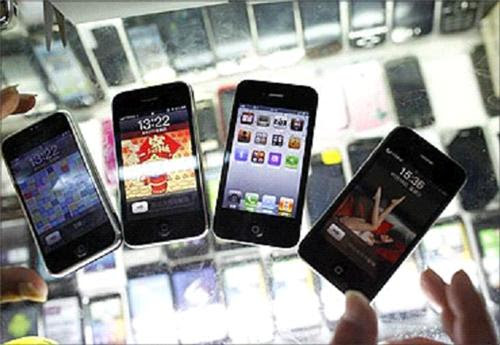 Fake iPhones are displayed at a mobile phone stall in ,
The newest version of Apple Inc's popular iPhone has already hit the Chinese market -- the fake market that is.
The 'hiPhone 5' is selling for as little as 200 yuan ($31) on China's top e-commerce platform Taobao, which is owned by Alibaba Group. 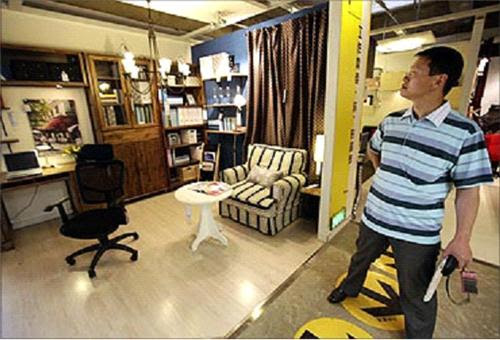 A customer looks at the placement of study room at a furniture store in , southwest 's province.
The store, which resembles an outlet of Swedish furniture giant Ikea, is one of a number of Chinese businesses replicating the look, feel and service of successful Western retail concepts. 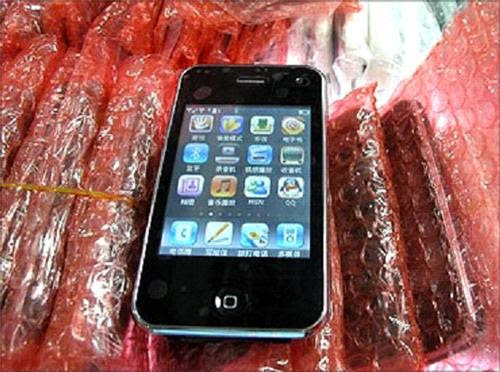 A counterfeit Apple iPhone, which sold for RMB450 ($66), is shown on top of other counterfeit phones with rough packing at a mall selling electronics in the southern Chinese city of Shenzhen in Guangdong province.
Apple computer, whose popular iPhone is widely copied in , isn't the only foreign handset maker to suffer at the hands of counterfeiters.
Knock-offs of Samsung, Nokia and Motorola products are all sold openly throughout . 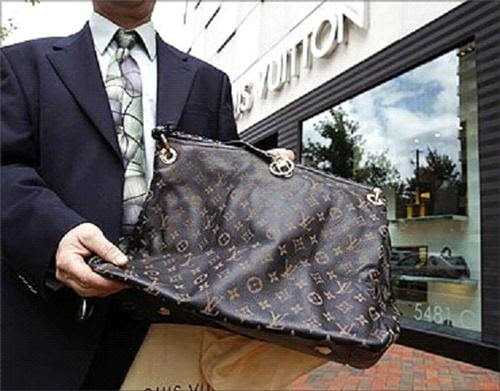 A fake LVMH handbag purchased and shipped from a based online website is displayed to the photographer outside a Louis Vuitton store in . 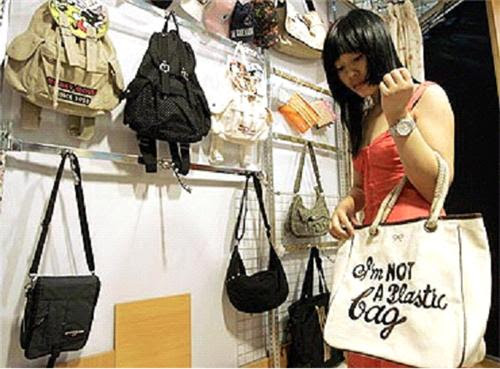 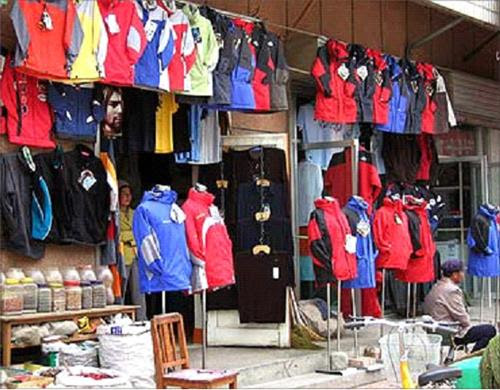 Goods are displayed at a shop in Xiahe, western 's province August 14, 2006. The counterfeit and low-quality goods on offer in Xiahe highlight the challenges of increasing consumption in rural areas. 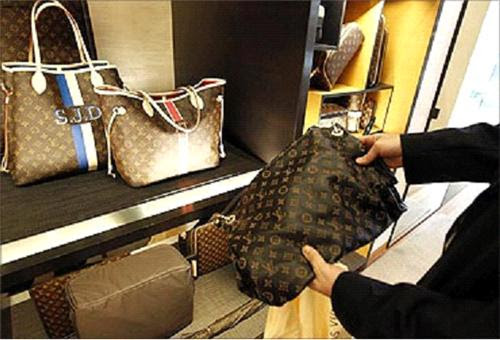 A fake LVMH handbag (R) purchased and shipped from a China-based online web site is pictured next to products on display at a Louis Vuitton store in Chevy Chase, Maryland.
The Organization for Economic Cooperation and Development estimates the amount of counterfeit goods and pirated copyrights in world trade grew from about $100 billion in 2001 to about $300 billion in 2011. 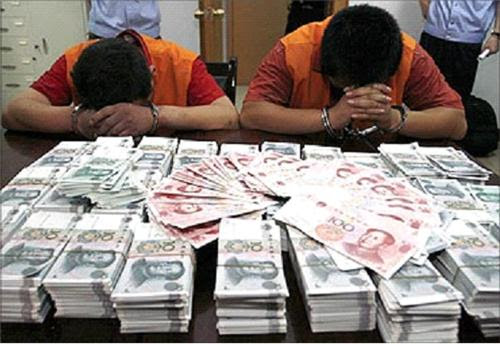 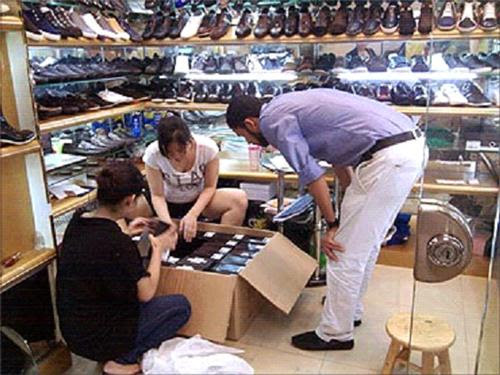 A customer looks at fake foreign brand shoes inside a store at Baiyun World Leather Market in the southern Chinese city of . 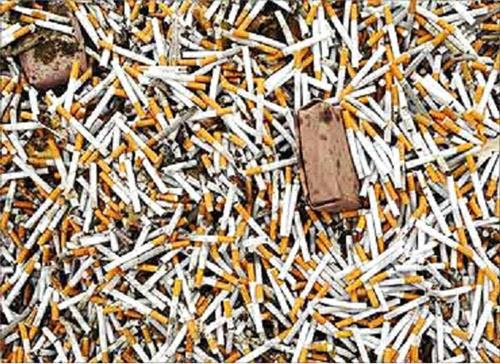 Confiscated cigarettes are seen before being destroyed during a campaign against fake tobacco products in province. 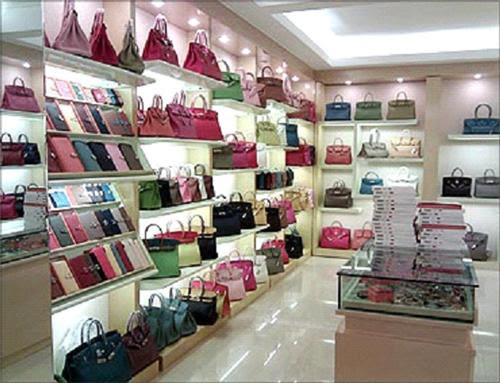 Fake foreign brand handbags are displayed inside a store at Baiyun World Leather Market in the southern Chinese city of . 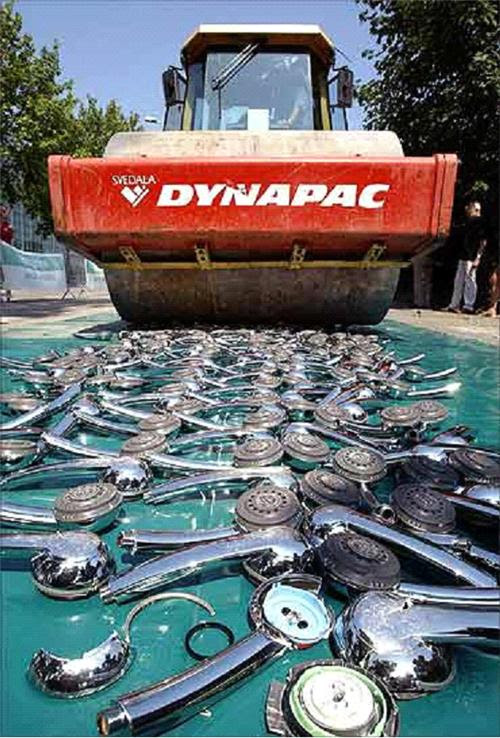 Employees of German sanitary systems company Hans Grohe AG use a heavy roller to destroy counterfeit fittings of plumbing and bathroom equipment made in near the European Parliament in .
Hans Grohe AG demanded a reinforcement of European legislation on counterfeiting. Goods are displayed at a shop in Xiahe, western 's province.
The counterfeit and low-quality goods on offer in Xiahe highlight the challenges of increasing consumption in rural areas. 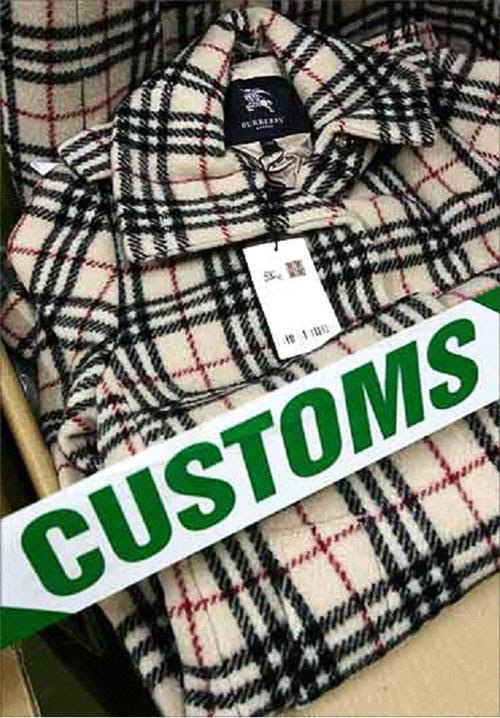 Counterfeit goods bearing Burberry name tags are seized by customs officials inside a warehouse in July 27, 2005.
Hong Kong Customs smashed a large syndicate of counterfeit goods, resulting in the seizure of HK$62.5 million worth of countercfeit clothes and leather goods, with some of them destined for . 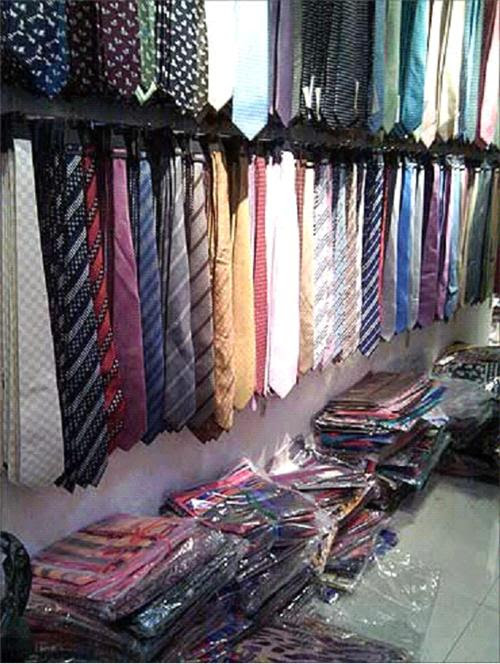 Fake foreign brand ties are displayed inside a store at Baiyun World Leather Market in the southern Chinese city of . 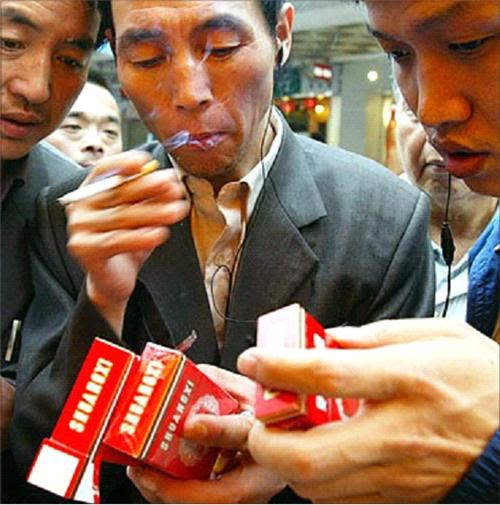 Chinese men try to tell the difference in the packaging of genuine and counterfeit cigarettes at a Consumer Rights Protection Day event in .
Consumer awareness has risen sharply in recent years as 's population has gotten richer and begun to depend on courts and the media to press its claims. 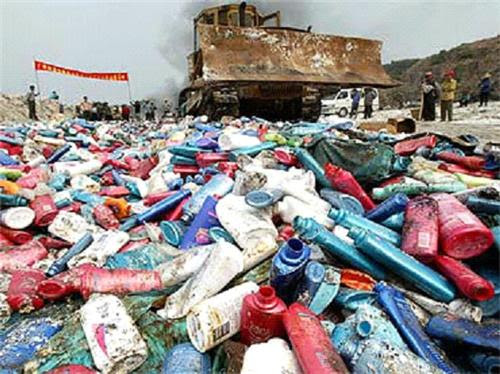 A bulldozer crushes pirated cosmetics bottles and other comsumer products in the southern Chinese city of .
More than $72,000 worth of pirated goods including salt, cosmetics, and melon seeds were destroyed recently. 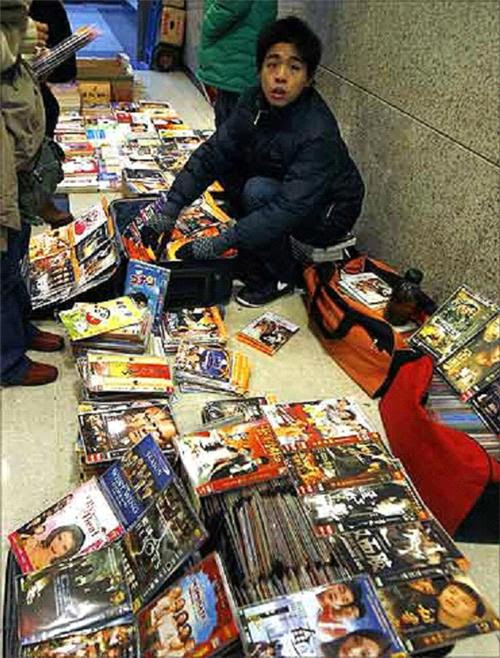 A man sells pirated DVDs at an alley in .
US officials had told that does not consider it acceptable for to suspend the showing of American-made movies. A vendor arranges pirated Microsoft software at a store in .
CNN
Posted by Bao Mai at 2:43 AM