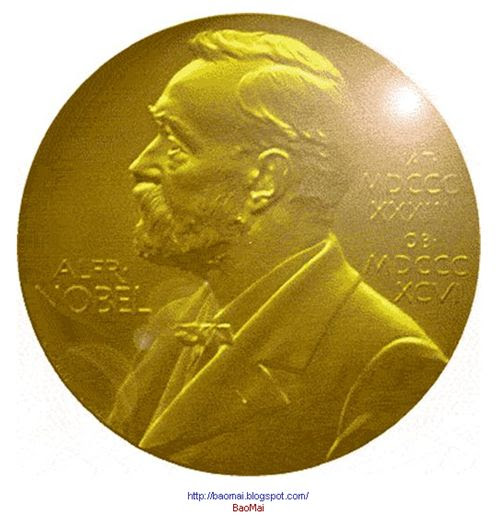 Dear Mrs, Dear Mr ,
Catholic Priest Thaddeus Nguyen van Ly, a well-known human rights activist, has worked relentlessly (uninterrupted) since over 30 years in his homeland, , peaceful for democracy and human rights.
Priest Nguyen van Ly has received numerous Peace Prizes from many organizations; amongst these are the Shalom prize given by the Catholic University of Eichstatt, and the Hellmann Hammett prize given by Human Rights Watch. He has used all prize money given to him to continue his work for human rights.
We believe that priest Thaddeus Nguyen van Ly and the Vietnamese pro-democracy movement should have the opportunity to be nominated for the Nobel peace prize. A nomination for the Nobel peace prize for Priest Nguyen van Ly will send a strong message of support and encouragement to the members of the Vietnamese pro-democracy movement in their difficult struggle. As the same time, it will send a clear message to the Vietnamese government, calling on them to stop their attacks on dissidents, to stop their on-going oppression toward their own citizens, and to begin a dialogue with their peaceful and pro-democratic opposition.  We hope that this will ultimately lead to democracy, respect for human rights, freedom of belief, and political liberty, with in .
We respectfully ask you to send your nomination for Priest Thaddeus Nguyen van Ly, before February , 2012, to the Nobel Prize committee by fax or by post:
Nobel Peace Prize Selection Committee
The Norwegian Nobel Institute
Henrik Ibsens gate 51,
N-0255 -
Tel :  (00) 47 22 12 93 00
Fax : (00) 47 22 12 93 10
We thank very much for your attention and your support.
Sincerely Yours,
Enclosure: Biography of Priest Thaddeus Nguyen Van Ly.
Thai Thanh Thuy (thaithanhthuytt@googlemail .com)
Progression Party
On Sept,2010 , current Father Ly was crippled arm and jambre after prison ,but he continues to strike fain to contest the invader of China in the Paracel and Spratly Islands and protesting against Chinese quiet yet comprehensive invasion of Vietnam with the oomplicité of communist party Vietnamese and the gourvenement Vietnamese dictatorship, father Ly re-proclaims an election with several party in 2011, liberer prisionniers politiques,freedom of press and to respect human right.
Mouth of Father Ly was closed by the security officer in front of judges, public prosecutors and the press in the courtroom on March 30, 2007.
Father Thaddée Nguyên Van Ly, from prison to the 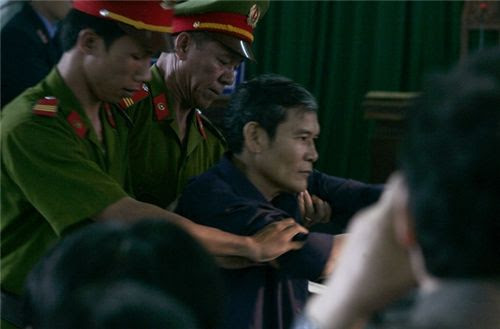 Zenit.org – November 19, 2009
– Father Thaddée Nguyên Van Ly was urgently transported to a hospital in , indicates “Churches of Asia”, the office of Foreign Missions of Paris (MEP).
Early in the morning of November 14th, 2009, Father Thaddée Nguyên Van Ly suffered a stroke which paralyzed the right side of his body.  He was immediately transported to the Security Hospital (also known as the 18 September Hospital) in Hanoi from Section 11 of the Ba Sao Prison where he had been sentenced to eight years’ imprisonment.
Members of his family were authorized to stay and to take care of him.
According to certain information provided to a reporter for Radio Free Asia (1) on Tuesday, November 17th by a nephew of the priest, his health appears to have improved somewhat during his stay at the hospital and on that day he was able to raise his right arm and right leg several centimeters above his bed.
According to the same person, Father Ly is staying in a single room and looked after by a competent medical staff.  Four or five agents are insuring his “security”.
A newswire by AFP (2) reports the declarations of the American lawyer, Maran Turner, the head of Freedom Now, a group for the defense of dissidents.  She declared that the priest had been suffered a stroke while he was kneeing to pray on Saturday, November 14th.  However, the relatives of the priest specified that the paralysis of the right-hand side that followed only affected his arm and his leg; his face was not deformed and the Priest continued to speak as usual.  The nephew of Father Ly added that his uncle’s spirits were good and that he was very optimistic.
The American lawyer had also called on the Vietnamese government to release the dissident priest immediately so that he can receive the medical care that he needs.
On the day before September 2, the national holiday, the Minister of the Security announced that the name of Father Thaddée Nguyên Van Ly would not figure on the list of the 5,500 prisoners receiving a pardon on this occasion, and he declared that “inside the detention camp, the good health of the prisoner was assured.” (3)
However, the priest’s sister and nephew reported that when they visited him on August 24th, he had arrived in the visiting room limping.  He explained that he had had a series of health problems since last May, undoubtedly due to his high blood pressure: hemorrhages, falls, the beginning of paralysis in his limbs.  When the Archbishop of Huê was informed of this, he recommended that the imprisoned priest be remembered in the prayers of the priests of the diocese and urged two of them to visit him in prison (4).  When he met with them, Father Ly told them about his health problems but assured them that the care given by the doctors in prison was sufficient.  Previously, both priests had asked the prison authorities to authorize him to go to the hospital where he could get proper care and medication or to release him early from prison.
Father Ly is presently being detained for eight years in the detention camp at Ba Sao, in the .  This sentence was rendered on March 30, 2007, by the People’s Court of Huê, after a trial during which he was not allowed to speak (5).  After five stays in prison since 1975, the priest has now spent more than sixteen years in prison.
(1) Radio Free , broadcasts in Vietnamese, November 16 and 17, 2009.  See also broadcasts in Vietnamese on BBC, November 17, 2009
(2 ) AFP, Washington, November 16, 2009.(3) See EDA 512(4) See EDA 514
(5) See EDA 460
The authorities have demonstrated a criminal approach towards some prisoners of conscience who are being held in detention despite their very precarious health.  Father Nguyen Van Ly, the chief editor of an opposition newspaper, had a cerebral struck while in his cell.
“This iron hand of the authorities towards political prisoners, particularly concerning journalists and writers, is not worthy of a country that has just chaired the United Nations Security Council.
Given the urgency of these humanitarian situations, we hope for a public reaction from the European Union which maintains a dialogue on human rights with and from which we are still awaiting results”, asserted Reporters without Borders.
Reporters Without Borders - November 19, 2009
On April 10, 2010, Father Ly told the Canadian Ambassador Deanna Horton in a telephone call that Bloc 8406 will change its strategy. Bloc 8406 now wants to convince the Vietnamese Communists instead of being oppressed by them. With Father Ly as one of its founder, the members want  to convince the communists by showing their faith and their ethics. 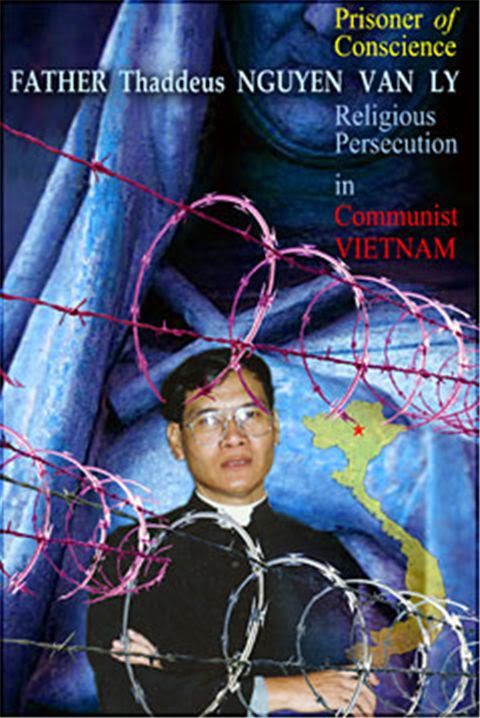 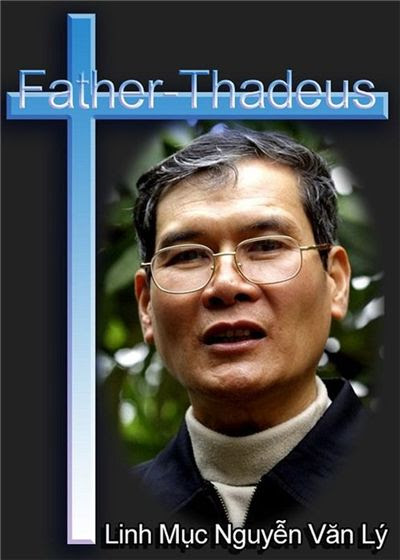 Born on August 31st, 1947; arrested septembre 1977
In September 1977, Father Ly was arrested because of distributing two essays by Archbishop Nguyen Kim Dien about the religious oppression of the government. He was sentenced to 20 years in prison and sent to a prison labour camp near Hue. One year later, authorities released Father Ly but forbade him to engage in religious activities.
Father Ly continued his religious teachings and in January 1983 he was ordered into internal exile by the Vietnamese authorities. He sent a letter in reply which exposed the government's religious oppression, and he pledged to remain at his parish, where his followers gathered around his residence in support. On the morning of May 18, 1983, Father Ly was arrested by security forces by violence. He was subsequently sentenced to 10 years imprisonment and 4 years probation. Released in July 1992, Father Ly was placed under police surveillance and again banned from conducting religious activities.
On November 24, 1994, he issued a "10-point Statement on the State of the Catholic Church in Hue Diocese" detailing the Vietnamese government's violations of religious freedom. Authorities exiled him to Thuy Bieu village near Hue which had only a small Catholic community.  On November 2000, Father Ly re-stated his 10-point Statement, followed by an appeal titled "We Need True Religious Freedom in Vietnam."
On May 17, 2001, over 600 security police stormed An Truyen Parish to arrest Father Nguyen Van Ly. In a two-hour trial on October 19, 2001, with forbiddance  of press coverage, Father Ly was sentenced to 15 years in prison and 5 years of house arrest. As a result of international pressure, Father Ly was released from prison in early 2005.  Despite a lung condition and his having been placed under house arrest, he immediately took up work for human right. 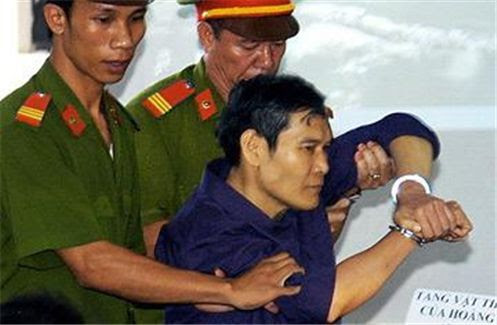 On 8 April 2006, “Bloc 8406” was founded, Father Ly is one of the founders. For the first time, 118 Human Rights activists across Vietnam unanimously spoke up to address the lack of freedom in Vietnam and called for democratization of the country in the “Manifesto on Freedom and Democracy for Vietnam in 2006”.
On April 15th, 2006, the first and only privately-owned printed bi-weekly magazine in Vietnam, “Freedom of Speech”, was published by Father Ly and three other Catholic Priests, and distributed free of charge thoughout Vietnam via an underground delivery network. 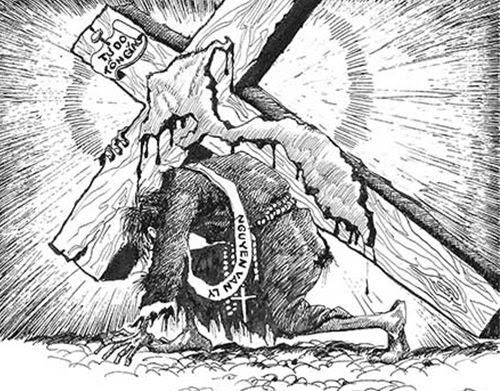 On August 22, 2006, Bloc 8406 proposed the steps and stages that will lead to the democratization of Vietnam, titled “Progress to Democratise Vietnam in four stages and eight steps.” 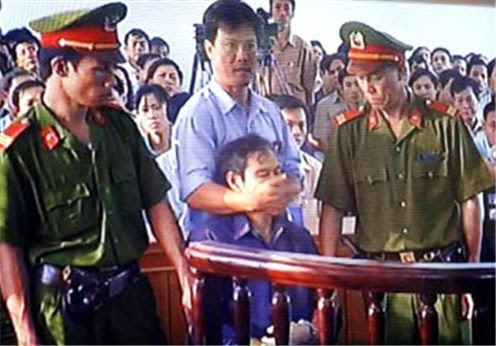 On March 30th, 2007, Father Ly was sentenced to 8 years in prison and to 5 years to house arrest because of „propaganda against the socialist government". His mouth was kept shut by the security officer in front of judges, public prosecutors and the press in the courtroom when he tried to say something. The self-defence is allowed by law of the socialist republic Vietnam.
Because of international pressure after his three strokes, Father Ly was temporarily released from detention for a period of 12 months to receive medical. 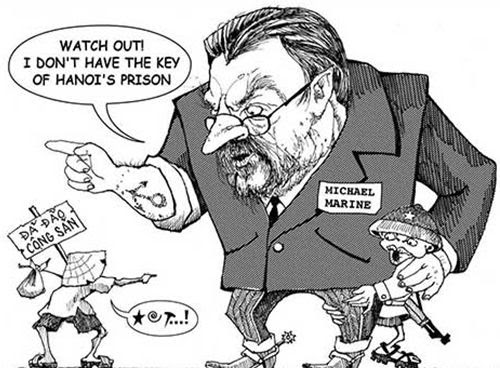 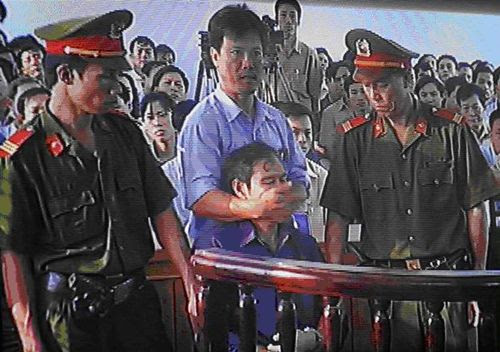 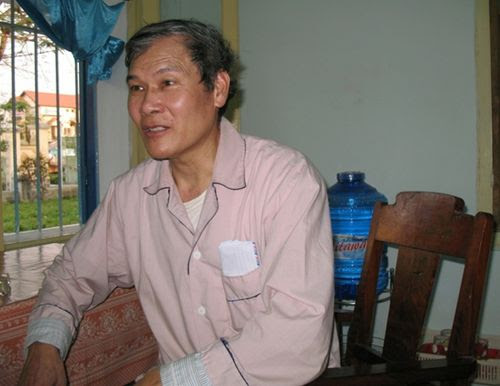 Father Nguyen Van Ly sits in his room inside the Hue Archdiocese in Hue city on March 15, 2010. 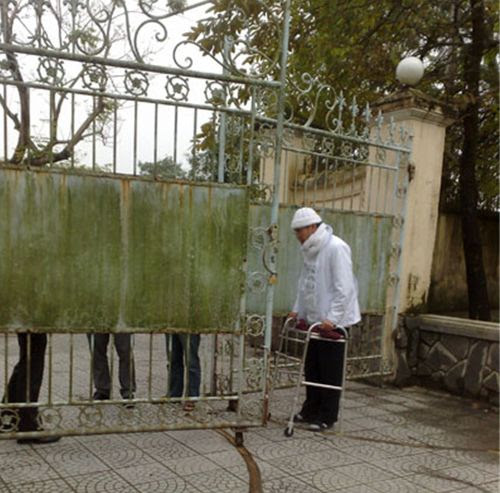 Father Nguyen Van Ly at the Archdiocese of Hue during his temporary medical parole from prison.
Posted by Bao Mai at 9:22 PM