HANOI, Vietnam — Vietnam’s government has asked its citizens to debate planned revisions to the country’s constitution. But when journalist Nguyen Dac Kien weighed in on his blog, he quickly discovered the limits of its willingness for discussion. His state-run paper fired him the next day.

Kien had taken issue with a statement by the Communist Party chief in which he said discussions over the revisions should not include questions over the role of the party.

In a post Monday that rapidly went viral, he wrote that the party chief had no right to talk to the people of Vietnam like this, and that state corruption was the real problem.

Kien said he wasn’t surprised by his firing, which was announced Wednesday in an article on page 2 of the Family and Society, the paper where he worked.

“I knew that there would be consequences,” Kien said by telephone. “I have always expected bad things to happen to me. The struggle for freedom and democracy is very long and I want to go to the end of that road, and I hope I can.”

Vietnam opened up its economy in the 1990s after the collapse of the Soviet Union deprived it of a vital economic partner and ally, but under an authoritarian regime, government critics, free speech activists and  other people the party regards as dissidents can be locked up for many years. The emergence of the Internet as an arena of free and uncontrollable expression, coupled with a stuttering economy, has led to new pressures on the regime, but few think its grip on power is seriously weakening.

The government is revising the constitution for the first time since 1992, citing the need to speed up the country’s development.

Perhaps the most significant change in the draft on the government’s website is the removal of language stipulating that the state sector “plays the leading” role in the national economy. That could help the government in its pledge to restructure the country’s lumbering, corruption-riddled and unproductive state-owned sector, which eats up much of the national budget and has been blamed for the current economic difficulties.

The government has asked for public discussion on the revisions, even opening up its website for comments, a move that carried some risk. In response, a group of several hundred well-known intellectuals, including a former justice minister, have circulated an online petition calling for multiparty elections, private land ownership, respect for human rights and the separation of the branches of government. More than 5,000 people have signed it.

Vietnam’s state-owned television station quoted the Communist Party’s general secretary, Nguyen Phu Trong, as saying those ideas amounted to the abolishment of article 4 of the constitution, which guarantees the political dominance of the party. He said that was a “political, ideological and ethical deterioration” and should be opposed.

Kien immediately took to his blog, writing “you are the general secretary of the Communist Party of Vietnam. If you want to use the word deterioration, you can only use it in relation to Communist Party members. You can’t say that about Vietnamese people.” He said there was nothing wrong with wanting political pluralism, and that “embezzlement and corruption” by party members was a bigger problem.

The Family and Society newspaper, which is owned by the ministry of health, said in the article that it fired Kien for “violating the operating rules of the newspaper and his labor contract,” adding that he alone was “accountable before the law for his behavior.”

In a posting on his Facebook page after his firing, Kien said “whatever happens, I just want you to understand that I don’t want to be a hero, I don’t want to be an idol. I just think that once our country has freedom and democracy, you will find out that my articles are very normal, really normal, and nothing big.”

He also said he understood the decision of the paper’s editors, saying “if I were in their position, I may have acted the same.” 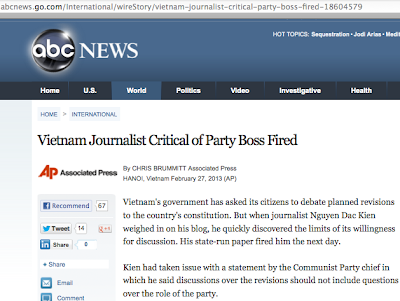 A Vietnamese journalist said Wednesday he had been fired from his state-run newspaper after criticising the head of the ruling Communist Party in a personal blog.

Nguyen Dac Kien was sacked from the Family and Society newspaper less than 24 hours after he published an essay on his blog -- which quickly went viral -- criticising a speech by the party's general secretary Nguyen Phu Trong.

The newspaper falls under the remit of the Ministry of Health.

"I am not surprised. After what I wrote (my removal from the paper) was easy to predict," Kien, who had worked at the newspaper since 2008, told AFP by telephone.

"I disagree with his (Trong's) speech... I think it is unacceptable," the 29-year-old reporter said.

The newspaper said in a statement that Kien was sacked for "violating the operation status of the newspaper" and would have to take "personal responsibility" if prosecuted.

Speaking on Monday Trong, one of Vietnam's most powerful leaders, accused people calling for political reforms in the authoritarian state of showing "political, ideological and moral deterioration".

"Who wants to deny the Communist Party's leading role? Who wants pluralism and a multi-party system? Who wants separation of power?... This must be nothing else but deterioration," he said.

Responding in his essay, Kien said Trong had "no right to address the whole country" and only certain communist party officials wished to preserve the protected status of the party in political life.

"You cannot say that it's the aspiration of the Vietnamese people... only embezzlement and corruption, running counter to the benefits of the people and the nation, are deterioration," he added.

The reporter, who is married and has one young son, told AFP he was prepared for difficulties after his sacking but was worried about the impact on his family.

"I will continue to pursuit my path fighting for democracy in this country," he said.

Vietnam ranks a dismal 172 out of 179 countries on the latest Reporters Without Borders press freedom index. 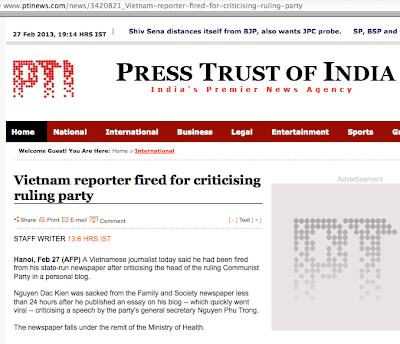 A Vietnamese journalist working for a state-run newspaper has been fired and threatened with prosecution after criticizing a Communist Party leader on his personal website.

Nguyen Dac Kien was let go by the official Family and Society newspaper on Tuesday, less than 24 hours after writing a blog post that took issue with a speech by General-Secretary Nguyen Phu Trong.

In the nationally televised speech Monday, the general-secretary said those who call for pluralism, a multi-party system and separation of power represent a "deterioration" of Vietnamese society.

Kien's blog post, which went viral , said the leader had "no right" to address the people of Vietnam like this, saying state corruption was the real problem with Vietnam.

The paper, where Kien had worked since 2008, quickly put out a statement saying the reporter had "violated the operating rules" of the publication and had been fired. It warned he will be "held accountable before the law for his words and behavior."

Kien, who is married and has a small child, says he had done nothing wrong, but that he is not surprised by the firing. He says he will continue fighting for democracy in Vietnam and is prepared to face the ramifications of writing the article.

Vietnam is a one-party Communist state that strictly forbids criticism of its leaders. It increasingly has jailed political dissidents and activists who question the party's authority. 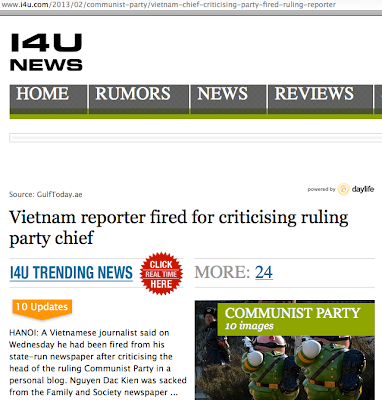 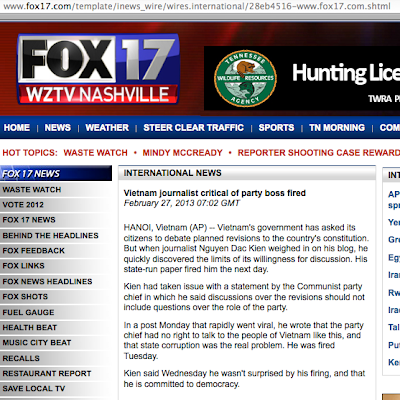 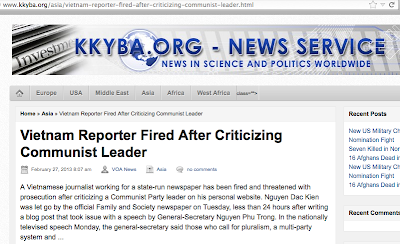 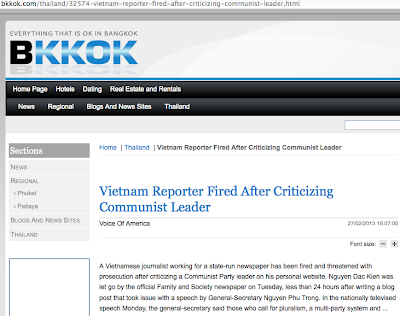 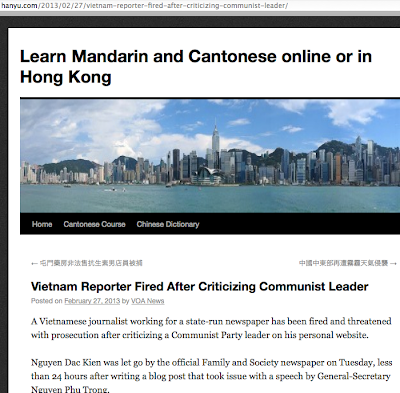 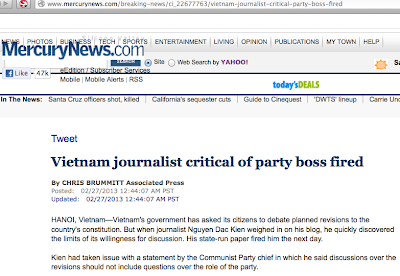 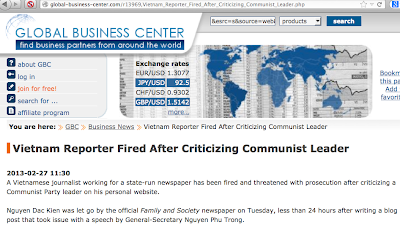 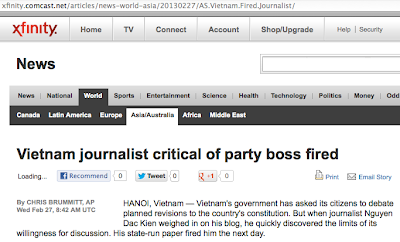 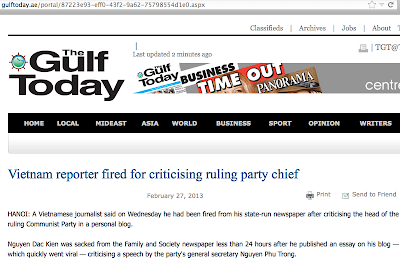